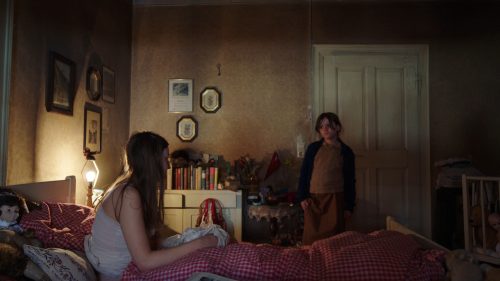 Synopsis:
The still life of a family in 57 pictures.

Germany in the 70s. Stephanie is an intelligent and lively child. However, she feels that something is wrong in her family, something that cannot be put into words. The unspoken lurks beneath the surface of everyday life.
She leads an isolated life with her parents, which is marked by the symbiotic relationship with her mentally unstable mother Sybille. Sybille has never really left her own childhood behind and lives a life amidst the things of the past and her memories. Stephanie’s father is also not a trustworthy support for the child.
Stephanie withdraws more and more into herself and the passing years bring only aging, but no future with them.
Thus Stephanie flees early from the narrowness and hopelessness into an outlying world of dark fantasies, which are nourished by the traces of past times and belong only to her. One day, however, her secret penetrates into the reality of the family…

Experiences believed to have been suppressed from the past influence the lives of future generations as diffuse moods or atmospheres – the inescapable standstill lies on people’s shoulders like a leaden blanket. Not tangible, not namable but inexorable. Inner abysses form the only escape route for a soul in need.